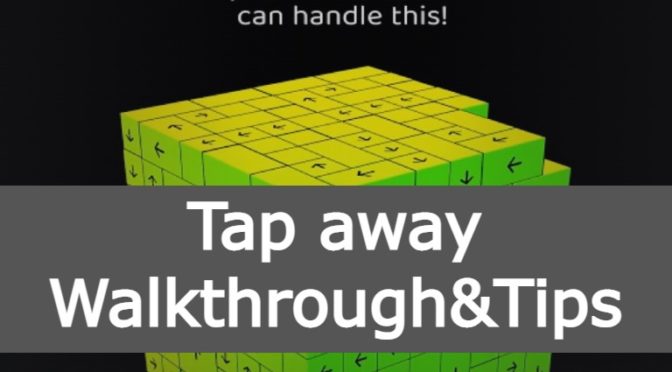 Tap Away:There are four points to keep in mind for strategy

This article describes basic play and basic strategy for Tap Away, a puzzle game application that became popular through advertisements and can only be solved by left-brain thinkers.

Tap Away is an addictive game having been downloaded more than 200 million times. The key to clearing the game is to be aware of four points.

It is especially important to play carefully, considering there is no time limit.

We’ll explain the basic gameplay method so even those who have never played this app before can understand it, please refer to it and give it a try.


What kind of game is it?

Tap Away is a game in which the player must erase puzzles in a specified direction, which became well-known through advertisements seen online.

It is designed with puzzles that are easy to solve at first, but become very difficult in the latter half, and can only be solved by left-brained players.

The number of moves you can make is limited, and if you get a game over you will have to start from the beginning, so you should play carefully, especially in the latter half of the game. The game is deceptively simple and you can get items that change appearances by watching advertisement videos, so it is a game that you can never get bored of.

Tap the puzzle pieces on the screen to clear them.
However, the puzzle pieces can only be moved in the direction their filled color faces, so as the number of pieces increases, you need to rotate the puzzle to look at the pieces from different angles.

There is no time limit, but the number of times you can move the pieces is limited, so if you tap at random, you will lose the number of moves you have available and you’ll get a game over.
Even if it takes a long time, try to solve the puzzles deliberately.

Another interesting feature of Tap Away is that the appearance and effects of the puzzle and pieces can be changed.

This section describes the four main points of Tap Away strategy

In particular, as mentioned earlier, be careful about the number of moves you make, or you might end up with a game over just before you are able to clear it.

Once the game starts, the first thing to do is to tap away the filled puzzle pieces as you go.

In this example image, the two middle pieces and the one above them are the first ones that can be sent off. The higher the level, the more pieces you can erase initially, so it is better to tap away as many pieces as you can at first.


Point 2: Keep an eye on your available number of moves!

The number of moves you have available is displayed, as shown in the image, which in this case is 280.

As the number of pieces increases, it’s difficult to calculate how many more mistakes you’re allowed to make, so the game might end if you don’t attempt to solve the puzzle carefully.

Point 3: Watch out for accidental taps!

As the number of pieces increases, the number of available moves might decrease due to accidental tapping. It is useful to remember to pinch in and out (zoom in and out) to make the right pieces easier to tap.

We do not recommend that you leave it to luck and tap at random, as you will lose track of too many puzzle pieces.
Even if you can clear a piece with good luck, it will be difficult to clear the puzzle because your number of available moves will fall.

If you are unsure, swipe around to look at it from different angles.
You can also rely on the bombs that can be activated by using the coins from the bottom of the screen.

Real money can be used in Tap Away to remove ads.
This can be done by tapping “NO ADS” at the top of the app home screen.
As of October 2022, the payment amount for this is $3.54.

In this article, we explained the strategy and basic play of Tap Away.
At first, the game is simple with few pieces, so you get used to it quickly.

Let’s review the key points of the strategy.

Even if you cannot clear the game at first, your chances of clearing will get better if you keep these points in mind and play the game a few times.

This is a game you can lose track of time and immerse yourself in, so we encourage you to give it a try for yourself.

Stormshot-Mystery of Treasure Isle:How to play,Walkthrough,Tips.

Tap & slide to adjust direction of fire.Think about the timing and angle, and shoot the enemy well.Gather supplies, build islands, and develop your country! Stormshot-Mystery of Treasure Isle:How to play,Walkthrough,Tips.

How to Play Survivor.io & Strategies For Beginners | Walkthrough&Tips