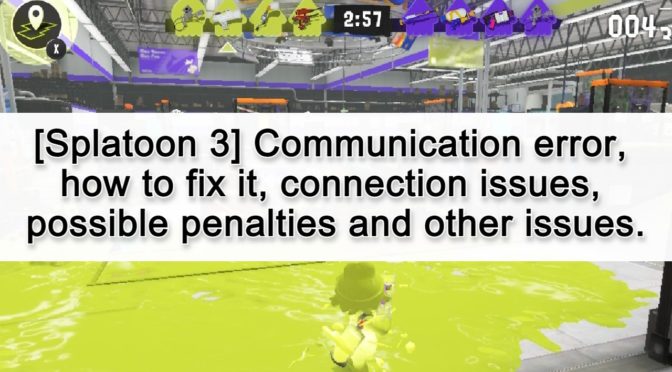 [Splatoon 3] The cause of a communication error that occurs frequently.

The following are causes and solutions for “A communication error has occurred” and “An error occurred while communicating with the server” errors that pop up in Splatoon 3.

Splatoon 3 went on sale on Friday, 9/9/2022. Many people have been waiting for it, with many players immediately posting their gameplay and experiences on Twitter and Youtube.

However, many players have reported communication errors, and there have been incidents where matches have dropped multiple times.

This section goes into some causes and solutions for communication errors.

Communication errors can occur during any match including Regular Battle, Anarchy Battle and Salmon Run and some users even appear to experience them multiple times.

Sometimes a notification suddenly appears in the middle of a match that a communication error has occurred, or at the results screen after the match.

Official channels have announced the cause of the communication error

One cause of this is the server, the developers officially announced they are aware of the common error phenomenon early after the release.

This cause is likely to be resolved as soon as it is addressed in future updates.

Communication errors due to player’s environment

A poor Internet connection on the player’s side is one cause of communication errors during matches. Particularly, when the communication speed is slow or when using a wireless connection the game is prone to becoming unstable.

In this case, investigate the following points.

How to test the connection with the Switch itself

2.Under “Internet,” select “Test Connection.” Check for any problems with speeds or other issues on this screen as well.

Check for any problems with speeds or other issues on this screen as well.

3.Confirm the status of the connection test.

You can check the communication status and speed by conducting the connection test, as well as check the NAT type and upload and download speeds.

The NAT type is a connection method that varies depending on the environment in which the router is installed, it is also described on the official Nintendo website.


Errors from communication with other consoles

In addition to the usual communication error, you may also get an error message that says “Could not communicate with the other console.” This case often resolves itself when the game re-enters a matching status, it’s considered a temporary error.


What happens if you disconnect or get communication errors during a match?

In Splatoon 3, if a user disconnects immediately after the start of a match or a communication error occurs, the match won’t be counted. Further, if a player disconnects after halfway into the match, the winner is awarded and the loser is considered to have a nullified match.

This information is not officially confirmed and will be updated as soon as it is available.

However, in many cases, the communication error event is not judged as the player’s line going down, and the match is often ended for all players in it.

Penalty for too many disconnections

[Splatoon 3] What to do if you can’t join or play with your friends.

Splatoon 3 does not have a standard voice chat function in the game itself, so users must use the chat function on the Nintendo Switch Online application, or use an external service such as Discord for voice chat.
[Splatoon 3] How to voice chat with friends on the official app or other service.